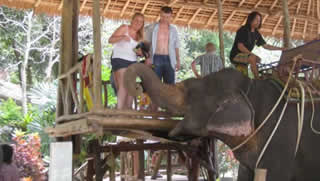 Phuket is a popular tourist destination and has several Elephant Camps. Easy Day Thailand offers Elephant Trekking tours to the best Camp on the Island. 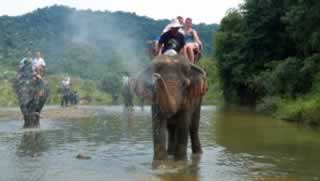 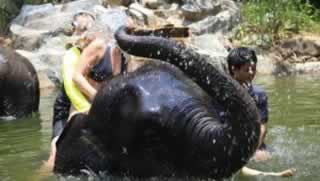 Koh Samui in the Gulf of Thailand offers Elephant trekking in the hills of the Island of Samui. Daily Tours combined with Sightseeing. 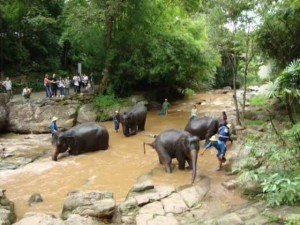 Thailand elephants do actually differ slightly from other Asian elephants; they are a little smaller with shorter legs, although their bodies do tend to be a little broader than their Indian cousins.

Their diet consists of bananas and banana leaves, they love bamboo and tree bark, and they live in the rainforests of the country.

However, increasing pressure from human population and illegal logging, their environment has become much reduced and their numbers, over the last century, have dwindled quite considerably, down from 100,000 to only around 3500 currently living wild.

Elephants are considered the national animal of Thailand, the Thai People have even named a beer (Chang Beer) after them, Chang is Elephant in Thai.

Thai people do have a special kinship with these magnificent animals which stretches back hundreds of years. Elephants have played a major role in Thai culture, making travel easier, helping out with the farmer and labour and they were even used in battle -long ago.

In Thailand there is a national day for the elephant and it’s called ‘Chang Thai Day’ which has three main commitments: 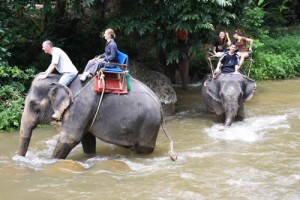 Many elephant owners (Mahouts) in Thailand tend to stay with their big eared friend for life, taking the baby elephant and training it, they form a very close and tight relationship with each other.

Unfortunately, the Mahouts are finding it even more difficult to make ends meet with their elephants and so, unhappily, must resort to taking their elephants on to the streets of large cities in order to beg for food and money –it’s a sad scenario and yet, all too true.

So, over the years, there have been many articles written for newspapers stories new reports about elephant abuse, that said, here in Phuket most elephants camps that we deal with take genuine care of their of animals.

Although elephants are not naturally native to Phuket, (probably because they tend to enjoy the cooler climates in the north of the country) there are indeed quite a few elephant parks on the island.

All the elephant parks we use comply with all government rulings on the elephants and are run under tight guidelines.

There is even a Thai Elephant Orchestra which is a musical collaborative group, comprising of as many as fourteen Thai elephants; they are near Lampang in Northern Thailand. These impressive elephants play music instruments on heavy duty specially designed instruments.

Thai elephants live in the wild still and, if you are in the vicinity of these national parks, maybe you too can see these mega beasts in their natural environment.

Find them at places like: Mae Hong Son, Chumpon and Ranong which is close to the Burmese border orther places include Huai Kha Khaeng Sanctuary, the Erawan Falls National Park, also the Petchabun, Dangrek Range, and southern Thai Peninsular near Trang.