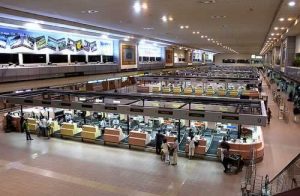 Don Mueang sure has a history, being officially opened as a Royal Thai Air Force base on 27 March 1914. Not many airports can boast such longevity and the very first commercial flight, was operated by the Dutch company KLM and landed at Don Meuang in 1924, thus making it one of the world’s oldest commercial airports.

Get in comfort to your Bangkok Hotel from Bangkoks Don Mueang or Suvarnabhumi Airport with Easy Day Thailand Airport Transfers.

Get in comfort to your Pattaya Hotel from Bangkok’s Airports with Easy Day Thailand Airport Transport.

World War II, the Japanese who occupied Thailand during this conflict, used it as a military base. However, the airport and runways where bombed on several occasions by allied aircraft. Soon after the war was over, during September 1945, the RAF took over control of the airfield, during the very brief British occupation up to March 1946.

And even more recently, during the Vietnam Conflict, Don Mueang was a chief command post and logistics centre of the United States Air Force. 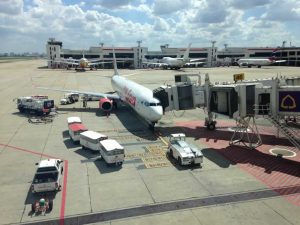 Finally, Don Mueang Airport finally closed its doors in 2006 after the birth of the new and super-modern new Bangkok’s Suvarnabhumi Airport. However, on 30 January 2007, the Thai Minister of Transport suggested a temporarily reopening of Don Mueang, as certain work had to be carried out on some taxiways at the new airport. So on the 25 March 2007, the airport officially reopened for some domestic flights.

During its pomp of the last century, Don Mueang was a massive player in Asian and World aviation, as almost the entire air traffic for Thailand was controlled from here, over 80 airlines operated out of it and over 160,000 flights serving up to 40 million passengers and 700,000 tons of cargo passed through in 2004 alone.

Don Meuang International was the 14th busiest airport in the world and 2nd in Asia by passenger volume alone.

Don Meuang has taken on a more relaxed role since the opening of the new Suvarnabhumi airport and has become a main low cost regional hub commuter flight for the many low-cost airlines in Asia.

In fact during 2015, this amazing historical airport once again broke a record by becoming the largest low cost carrier airport in the world.

On 16 March 2012, the then Prime Minister Yingluck ordered that all low-cost, chartered, and non-connecting flights may relocate to Don Mueang.

There are two terminals at Don Mueang International Airport.

Terminal 1 caters to the international flights and Terminal 2 for domestic flights.

There are many places to eat and drink here with many outlets still using this airport and fare from around the world is readily available and there are several bars too.

There are numerous Duty Free shops situated in both international arrivals and departures areas.