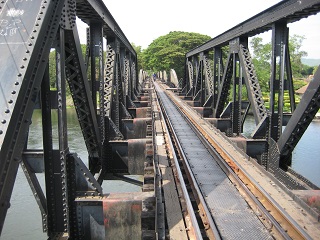 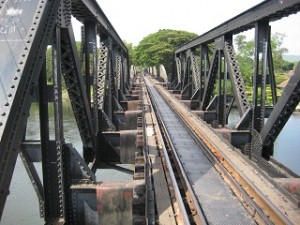 Kanchanaburi, a quaint little town in Thailand, is located 129 kilometers west of Bangkok. It has a mountainous landscape and is considered to be the third largest province in Thailand. Historians state that this town was near a village called Ban Lat Ya. The village has a historical background. It was used by the Burmese to invade Thai kingdoms.

Bordered by the Thanon Thongchai Range, this place is a welcome sight with its hilly terrain, sparkling waterfalls, gushing rivers, and several wildlife sanctuaries. Two important rivers, Maenam Khwae Noi and Maenam Khwae Yai originate from this range. Erawan Waterfall, the largest waterfall in Thailand, is found in this region.

Kanchanaburi, is looked upon as a tourists’ paradise. Filled with a wide range of exciting activities like river rafting, fishing, mountain climbing, bird watching, mountain trekking, mountain biking, exploring forests and sanctuaries, staying in bamboo rafts, canoeing, and golfing. It is the perfect spot to relax and enjoy. What is more, if you have an urge for adventure, you can get the opportunity to explore exciting caves. These caves are noted for being the dwelling spots of Neolithic men. You can also get to visit memorable places, such as Bridge on the River Kwai. The name is very famous because it was one of the World War II sites and a famous movie was made based on this site. 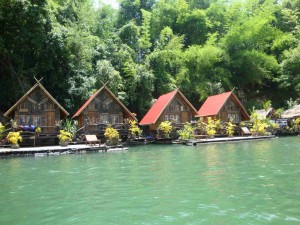 People in this area are mostly farmers but the town also has various industries such as sugar, agricultural products, and gemstones. The local people are simple in nature and love to celebrate festivals with lots of music and dance. These festivals are being celebrated and have been passed down to generations for centuries.

Kanchanaburi is well known for its scenic beauty and for being a source of major attraction for the tourists. In short, it is the perfect place to visit to enjoy and have a fun-filled and relaxing vacation.

Before you head out to the Kwai River Bridge, get a little history under your belt at this museum. Professional exhibits outline Japan’s aggression in Southeast Asia during WWII and its plan to connect Yangon (in Burma) with Bangkok via rail for transport of military supplies. Captured Allied soldiers as well as Burmese and Malay captives were transported to the jungles of Kanchanaburi to build 415km of rail – known today as the Death Railway because of the many lives (more than 100,000 men) the project claimed.

Across the street from the Thailand-Burma Railway Centre, the Kanchanaburi Allied War Cemetery is a touching gift from the Thai people to remember the POWs, mainly from Britain and Holland, who died on their soil. 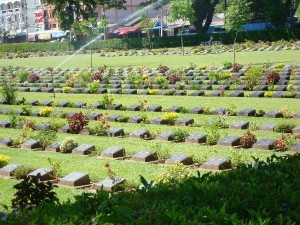 While the story made famous by the film The Bridge on the River Kwai is one of endurance, heroism and suffering, the span itself is just an ordinary bridge with an extraordinary history. A bit of imagination and some historical context will help to enliven a visit to the bridge, which was a small but strategic part of the Death Railway to Burma. Engineers estimated that construction would take five years, but the human labourers were forced to complete the railway in 16 months. Allied planes destroyed the bridge in 1945 but later repairs restored the span; the bomb damage is still apparent in the pylons closest to the riverbanks.

During the first week of December there’s a nightly sound-and-light show put on at the bridge. It’s a pretty impressive scene, with simulations of bombers and explosions and fantastic bursts of light. The town gets a lot of tourists during this week, so book early. The bridge is roughly 3km from the town centre and the best way for you to reach it is by bicycle. You can also catch a song taew going north along Saengchuto, but it isn’t obvious when to get off; if you get to the Castle Mall, you’ve gone too far. There are also three daily departures across the bridge on the Kanchanaburi-Nam Tok train

Near the bridge is a privately owned museum (Mae Nam Khwae; admission 30B; h9am-6pm), a veritable temple to kitsch, sometimes also known as the JEATH War Museum to capitalise on the popularity of another museum by the same name in town. The collection might be the oddest assortment of memorabilia under one roof, but the building does afford picture postcard views of the bridge.

This outdoor museum, the original JEATH, is run by monks as a testament to the atrocities of war. The displays of historic photographs are housed in a bamboo hut, much like the ones the POWs used. More a photo gallery than museum, it isn’t very informative, but it is heartfelt, especially the fading pictures of surviving POWs who returned to Thailand for a memorial service.

Easy DayThailand can book and organize your stay at all our recommended hotels and resorts, activities and more. Just click here to send us an email or use our 1-2-go contact form.