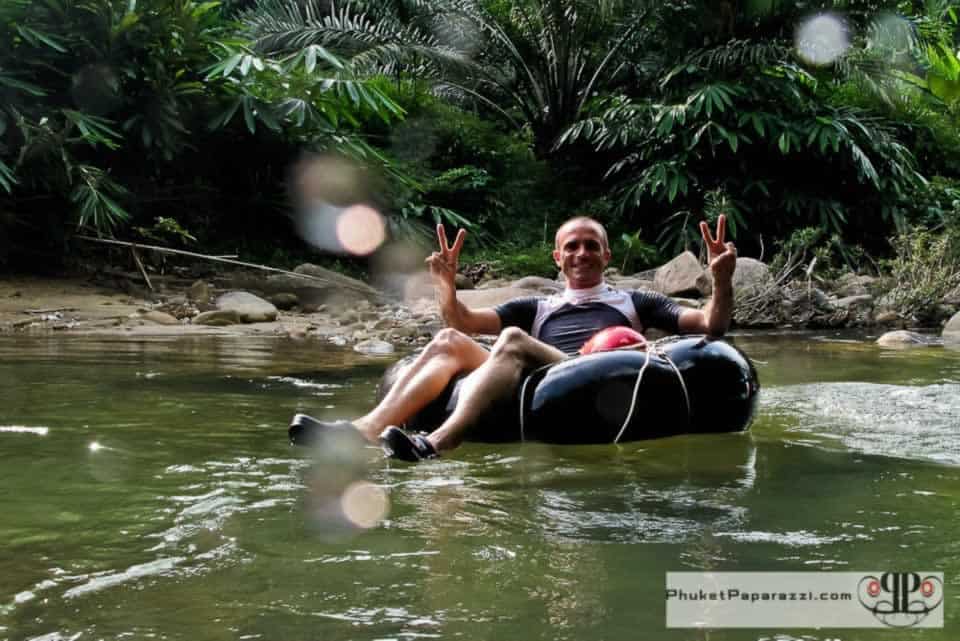 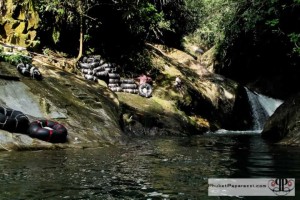 Kapong Safari Tour – Since many friends told me they had great fun on this Tour, I decided to give it a try as well.

Pick up was bang on time at 7:30 and I was greeted by the smiling driver and the friendly and entertaining tour guide Som. For the first few minutes I was alone on the minivan and then we stopped to pick up a large family of very friendly and funny Iranians who entertained us all day with jokes and songs. We were split in two minivans so everyone could sit comfortably, then a few minutes later we picked up my friend Adriano and finally started driving straight north.

In the northern part of Phuket, but especially after crossing Sarasin Bridge which connects Phuket Island to the mainland, the landscape outside the windows changes completely: less and less big houses and concrete, more and more plantations, jungle and little local houses so you can finally have a nice glance of the real Thailand, away from the usual touristy sights. Because of this the ride hasn’t been boring at all. 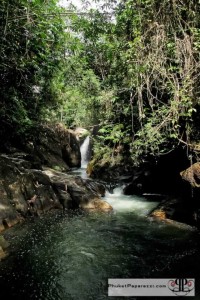 After a little more than one hour we neared Khao Lak where we had the first stop of the tour, for Elephant Trekking. I had already done elephant trekking a couple of times in the past so this time I was a bit afraid of getting bored but instead I was surprised that I enjoyed it more than ever. Instead of being in a camp the ride went all the way up in the hilly jungle, some parts were quite steep and entertaining, I could really see how powerful these marvellous and curious animals are. While slowly moving on the elephant’s back we also had the opportunity to have a look at the workers in the rubber plantation nearby while they were doing their interesting job of harvesting, processing and tapping the rubber.

After the 30 minutes ride on the pachyderm we had a little break with refreshments and jumped back on the minivan ready to move to the next stop. A few minutes in the minivan and we reached Kapong Resort, where the lunch was served. The place is beautiful, completely immersed in nature, surrounded by the bright green rice fields and a large pond populated by water lilies. The set menu Thai lunch served was very tasty with several dishes, plenty of food to enjoy.

After lunch and some time to relax we finally moved to the river which was the highlight of the whole day. We got off the van and crossed a narrow and funny rope bridge over the river that led to a shed where we had the chance to safely store our belongings in a locker, so we kept only our swimsuits and, in my case, a lycra shirt that I brought to avoid sunburn while in the water. When everybody was ready we jumped on the back of a 4×4 pick up truck and had a five minutes fun ride on a dirt road through the vegetation. Then we got off the trucks and one by one crossed another dangling but safe and strong rope bridge, walked for few more minutes on a jungle track alongside the river and finally arrived at a series of little waterfalls all connecting and ending in sorts of natural pools, all surrounded by a thick tropical jungle. Really a beautiful place with a calm and magical atmosphere, was almost expecting some elves to come out from the trees! 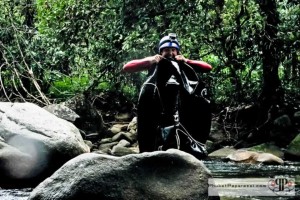 The always entertaining and smiling guide Som gave us free time to have a soak and a swim, since it was a warm sunny day in November, at first the water felt cold but it took just a couple of minutes to get used to it and feel comfortable. After a while we got called to a little hut lying on the rocks and had a demonstration of how the Bamboo Tea is done.

I spent already about two years in Thailand but never had the chance to see this unusual way to boil water: the local guy had previously left a long (about 50cm) and thick (about 15cm) bamboo cane laying on some burning coal for a while until the cane itself started burning on the outside as if it was a huge cigar but surprisingly it stayed intact on the inside, when it got hot enough he filled the cane with water and in a couple of minutes the water started boiling. He then poured the water in some cups also made of bamboo, added the tea bag and sugar and so we got our jungle bamboo tea! Thailand never stops surprising me… 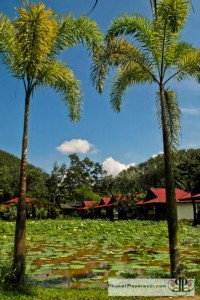 Finally it was tubing time. We all got into the lower pool and the helpful staff prepared all the inner tubes for us and helped everyone to sit in each doughnut. Once we were ready, after a small briefing, one by one we started to get down the first rapids. There are many staff standing at all the more difficult sections ready to help us to avoid getting stuck in the rocks and keep us descending fluidly along the river for the most possible fun. There were some faster and more entertaining rapid sections alternating with some more quiet and relaxing ones, great fun when hitting someone else’s doughnut and throwing water at each other as if it was some sort of race. The descent took approximately 30 minutes, or at least this is what I guess, because I had so much fun that I didn’t really notice the time flying.

When I had nearly reached the end and I was all pumped up unfortunately my inner tube hit a dry and spiky palm leaf that was stuck in a rock, so after a few seconds…psssssss….I was sinking with no more air in the tube! No worries, the river is very shallow so I just stood up laughing and so was my friend Adriano whom overtook me and of course started teasing me about the funny accident. Promptly one of the guides came to me and handed me his own inner tube so I could proudly reach to the end despite the little funny inconvenience.

The arrival was basically next to the shed where we left our belongings, there we had a chance to have a quick shower and change into dry clothes. 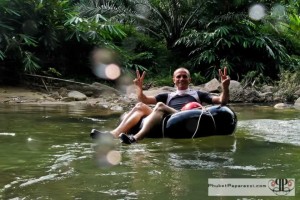 Once everybody was ready and cool drinks had been offered we jumped again in the minivan and started heading back to Phuket. I was quite tired but very satisfied in the day so as usual I fell asleep, it can’t be helped, cars cuddle me.

Apart from the great fun doing the activities, what really made me happy was to notice that there are still some places around Phuket that are almost unknown to tourism, therefore people can still enjoy some genuine Thailand.

Thanks a lot to the friendly and professional guides that entertained us, gave a lot of information about the local nature and allowed us to have lots of fun always in safety.

I recommend this trip to all kinds of travellers that want to enjoy real Thailand and its beautiful nature and like some safe adventure (it’s nothing extreme though), especially to groups of friends travelling together. Very suitable also for families with kids but wouldn’t recommend it for too small children especially in the period between May and November when the amount of average rainfall is higher and the river might be a bit more loaded.

Credit – Many thanks to Adriano Trapani who join me on this tour and provided the images for this article.

Things To Do in ThailandTubing in Kapong – Phang Nga Province