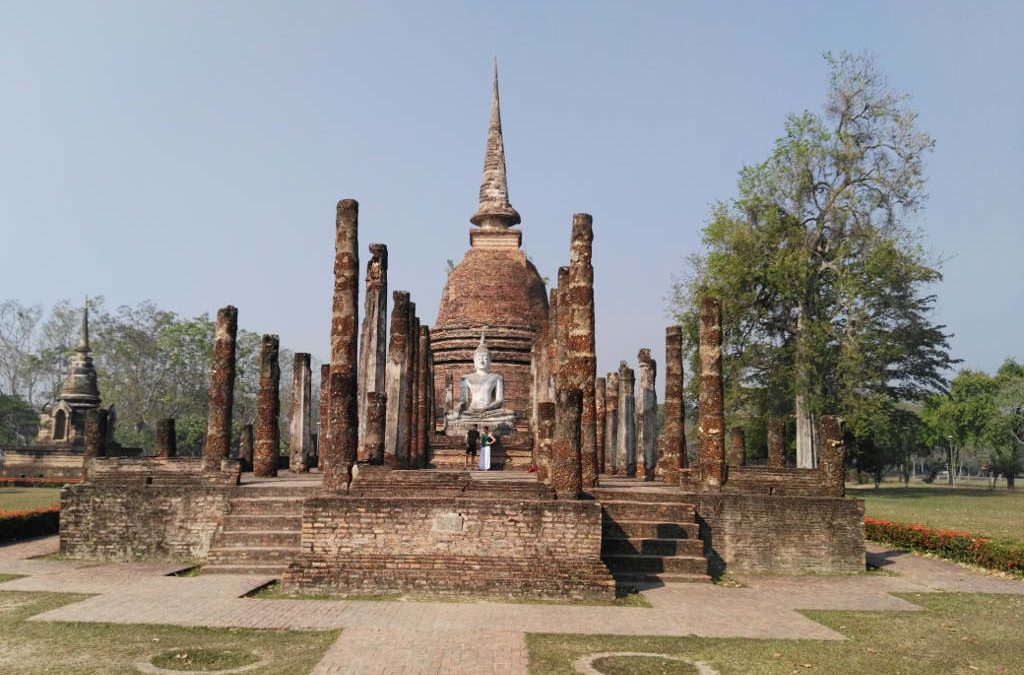 Sukhothai – is known as the first Kingdom of Siam in the 13th and 14th centuries, has a number of fine monuments, illustrating the beginnings of Thai architecture. Prior to this, modern-day Thailand was governed by local rulers loyal to the Khmer empire of Angkor. As the power of the Khmers began to wane, two Siamese generals banded together to expel the Khmers from the central plains, founding the new kingdom of Sukhothai. The medieval capital of Sukhothai now lies in ruins known as Old Sukhothai Historical Park.

Under royal patronage, Buddhism flourished and many impressive monasteries were constructed of brick covered with carved stucco. The greatest temple in the Central Area is Wat Mahathat, the spiritual focus of the city and the king. Sukhothai is accredited with the invention and development of many of the unique identifying characteristics of Siamese (Thai) culture.

The central area alone contains 21 temples enclosed by a moat, the greatest of which has 200 pagodas. It covers over a square mile, and to explore all this a bicycle is convenient. The four outer zones  are less crowded and touristy than the central zone. They all cover large areas, so a bicycle or a car is essential to get around.

The Park is one of the the best places in Thailand to celebrate Loy Krathong, a festival of light held over nine nights around the full moon of the 12th lunar month in November. During the festival, the ruins are covered in lights. There is a sound and light show at Wat Mahathat and fireworks at Wat Trapang Ngoen, in addition to numerous parades and concerts throughout the city. It´s recommended to Book accommodation early during this period.

You can travel by trains  from Bangkok and Chiang Mai to Phitsanulok, where buses connect to New Sukhothai. Buses also connect New Sukhothai with all major cities. The bus station is located about 3km west of the city center.

It is also possible to fly  from Bangkok or Chiang Mai with Bangkok Airways. The  airport is about 25km north of town; shuttle buses transfer passengers to hotels and guest houses cost  120 bath per person.

The Old Sukhothai Historical Park is about 12km from New Sukhothai.

Bicycles are available for rent at both places and there are frequent songthaews connecting the two cities.