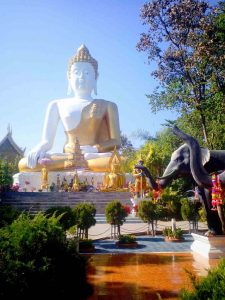 Wat Phra That Doi Kham – Is a beautiful not much visited temple situated on a lush mountainside near Chiang Mai Airport. It is known for its 17 meters high Buddha image .This temple is situated in Tambon Mae Hia, Amphoe Mueang.

The temple that was built towards the End of the 7th century sits on top of a forested hill just outside of Chiang Mai. Wat Phra That Doi Kham means golden mountain temple.

Huge golden colored Naga serpents guard the stairs on both sides of the pagoda. The courtyard contains large numbers of bells and very large gongs that you can strike. And the gallery contains numerous seated Buddha images in various postures seated. 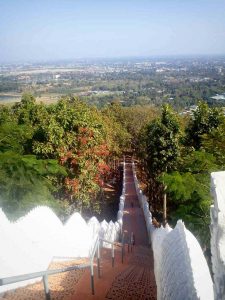 The chedi enshrines a sacred relic of the Buddha. A local legend tells an interesting folktale about Lord Buddha visiting this temple and meeting a rakshasa (demon) family who tried to eat him. Lord Buddha conquered them by sending them his kindness, which they could not stand. The rakshasa family eventually converted, revering our Lord Buddha, and also gave up consuming human flesh.

When the chedi collapsed in 1966 after heavy rain, local people discovered a number of Buddha images inside the damaged structure. Funds were then raised and the chedi restored.

Removed at some distance from the temple itself, an enormous white pearl Buddha statue is strikingly placed amidst the mountain greenery. Stairs carved in the form of white nagas (mythical water serpents) lead to a calm and quiet lookout point which offers a panoramic view of Chiang Mai.

It is a great place to check out and watch the sun set or rise. Enjoy the crisp fresh air there and the view of the valley spread out before you.